The table below provides details of the movement in average investment returns from various asset classes for the period up to 31 January 2019.

A new year, a new direction. Markets overcame their concerns from 2018 and moved in a positive direction in January. US Fed Chairman Jerome Powell quelled market concerns around the future of rates by walking back from prior comments and indicated that the Fed would be patient and is not in a hurry to raise rates further and may even slow quantitative tightening. This will mean more focus on the data than had been the case while the Fed was raising rates despite very little movement in inflationary pressures.

The longest ever shutdown of the US government due to the impasse on funding for the Wall impacted already slowing economic activity in the US. This combined with global activity slowing resulted in the US Fed keeping interest rates on hold at 2.25% to 2.5% in January.

The UK has continued to flounder its way through toward exiting the European Union with Prime Minister Theresa May suffering the most overwhelming parliamentary defeat in the democratic era after MPs rejected her Brexit deal by a resounding majority of 230.

Another significant sticking point is that under the rejected plan, the UK would stay inside the EU’s single market and still be subject to EU laws and regulations until the end of 2020. As the world’s 5th largest Nation with a significant amount of British exports going into Europe there are significant ramifications should a deal not be struck. Clearly in January despite a lack of headway markets seem to have shrugged this off for the time being.

Locally, economic activity is expected to slow as acknowledged by the RBA which revised down its growth forecasts from around 3.5% to 3% for 2019. The RBA this month has kept cash rate on hold at 1.5%, where it has been for a record 27 months, and acknowledged that the future direction of rates is now in the balance meaning that conditions could be moving such that a rate cut is possible. 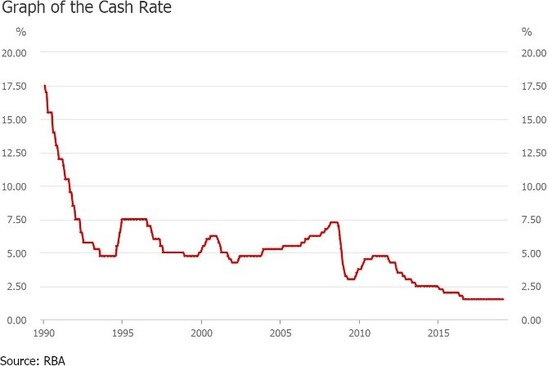 The positivity in markets may face further challenges as economic conditions weaken and corporate earnings slow. Importantly markets are less expensive than they were prior to their weakness and while global growth is slowing it is not expected to be significantly below the long-term average (trend growth) in 2019. In the US economic data continues to point to growth and doesn’t indicate a recession is imminent.

Local conditions similarly appear to point toward ‘trend’ or sub trend growth. The pace of property price declines is likely to be a key driver of consumer sentiment and the resultant demand for goods and services.

January saw a rebound in Australian shares (3.9%) with the momentum of the last few trading days of 2018 continuing. The weakest returns were recorded in Financials (-0.2%) ahead of the final report from the Royal Commission into banking, Consumer Staples (2.8%) and Health Care (3.8%) also struggled relatively. Strong returns came from Energy (11.5%), Info Tech (9.3%) and Resources (9.2%).

International shares (7.1%) were strong on a currency hedged basis. This was supported not only by the US Fed but also by Chinese authorities cutting a key interest rate (the required reserve ratio) by 100 basis points and promising tax cuts and additional government spending to provide support to their slowing economy. A rebound in the Australian dollar meant that unhedged international equities (4.1%) were not as strong.

Pleasingly bond markets were also positive and saw some positive correlation at a time when equities performed well. Australian fixed interest (0.6%) was not as strong as international fixed interest (1.0%). Both have provided significantly higher returns than cash returning 5.5% and 3.3% respectively for the 12 months ending January 2019. This demonstrates the importance of keeping well diversified portfolios exposed across assets classes. While having shorter duration is arguably a sensible and conservative approach the difficulty in predicting markets suggests that doesn’t mean having no exposure at all.

Bond yields continue to fall with Australian 10-year yield dropping 9 bps to 2.23% while the US 10-year yield fell 6 bps to 2.63% having come off their most recent peak of 3.24% in November last year. This suggests that bond markets are not confident of continued economic growth and Fed interest rate rises in the US.

REIT prices have been driven by healthy yields, with weakness in the residential sector pushing investors into the more commercial property exposures in listed REIT securities. The domestic REITs may have some challenges from negative gearing law changes should Labor win government, however this may be offset to some degree by increased demand from those investors previously targeting franked dividend that lose the franking benefit and simply focus on high yielding investments.

The office markets in Sydney and Melbourne are likely benefiting from infrastructure spending and growth in the economy. Retail clearly remains challenged with retail sales in December continuing to be unimpressive. The shift toward online shopping is providing benefit to warehousing demand and thus industrial REITs. Australian REITs are neither cheap nor expensive when looking at price to net tangible assets which is roughly at a 20% premium, in line with the long-term average.

Residential property remains and will remain a hot topic. Residential building approvals were down by 8.4% in December, more than expected, with units falling by 18.6% and houses 2.1% lower. Building approvals are down by 22.5% on a year ago as the housing downturn continues. Tight credit, falling foreign demand and the levels of supply continue to place downward pressure particularly on the Sydney and Melbourne markets.

CoreLogic data showed a further sharp fall in dwelling prices in January with national capital city prices now down 7.8% from their September 2017 high which is more severe than their fall in the GFC. Sydney prices have now seen their biggest fall since the early 1980s recession. 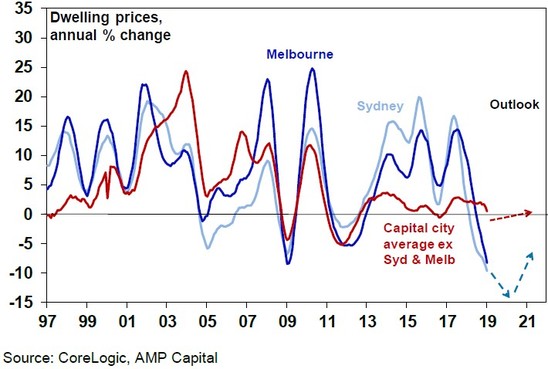